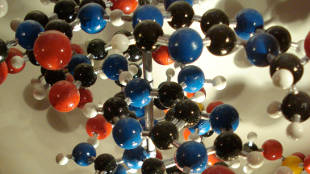 FLICKR, NET_EFEKTOn early Earth, around 3.5 billion to 4 billion years ago, some combination of basic molecular building blocks arose from a primordial soup of chemicals and then slowly evolved into the protein, lipid, and nucleic acid polymers that exist in all modern organisms. Which type of molecule came first has long been a matter of debate in the scientific community. Now, in two papers published this week (June 1) in PNAS, University of North Carolina scientists Richard Wolfenden, Charles Carter, and their colleagues have provided evidence to support the idea that proteins and RNA may have arisen concurrently.

“Our work shows that the close linkage between the physical properties of amino acids, the genetic code, and protein folding was likely essential from the beginning, long before large, sophisticated molecules arrived on the scene,” Carter said in a statement. “This close interaction was likely the key factor...

In the first study, Wolfenden, Carter, and their colleagues demonstrated how the hydrophobicity and size of each of the 20 amino acids influence protein folding. They also showed that, while these properties change with temperature, they do “not disrupt the basic relationships between genetic coding and protein folding,” Wolfenden said in the statement. This is important, the researchers noted, given that life originated on a very hot early Earth.

Turning their attention to the transfer RNA (tRNA) step in the DNA-to-protein process, Carter and Wolfenden found that one side of tRNA molecule sorts amino acids according to size, while the other side codes for polarity, further demonstrating the importance of the physical properties of these molecules in the genetic-protein code.

“Dr. Wolfenden established physical properties of the 20 amino acids, and we have found a link between those properties and the genetic code,” Carter said. “That link suggests to us that there was a second, earlier code that made possible the peptide-RNA interactions necessary to launch a selection process that we can envision creating the first life on Earth.”