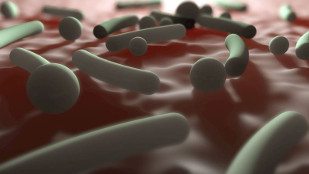 V. ALTOUNIAN/SCIENCE TRANSLATIONAL MEDICINEAnalyzing stool samples from 39 children in Finland for the first three years of their lives, a team led by investigators at the Broad Institute monitored the effects of factors including birth mode (vaginal versus Cesarean-section delivery) and the administration of antibiotics. Bacteroides bacteria dominated the gut microbiomes of most children born vaginally, while those born by C-section—and some of the vaginally delivered children—lacked Bacteroides for the first 6 to 18 months of their lives, the researchers reported yesterday (June 15) in Science Translational Medicine. Early-life antibiotic therapy was associated with less-diverse microbial communities overall, the researchers showed, and the 20 children who were treated with these drugs (for respiratory or ear infections) harbored antibiotic-resistance genes on microbial chromosomes and in mobile elements, some of which persisted beyond the completion of treatment.

“Regardless of their origin, our data suggest that the genomic context of...

Meanwhile, a team led by researchers at New York University (NYU) reported its analysis of microbiome development across 43 children in the U.S. for the first two years of the children’s lives. The team’s results, published yesterday in the same journal, show that birth mode, antibiotic treatment, and diet (breast milk– versus formula-dominant) all affected gut microbial composition to varying degrees.

Researchers have yet to establish any causal links between early-life perturbations to the gut microbiome and associated conditions, including allergies and autoimmune disorders.