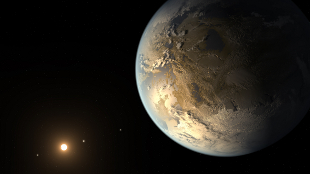 An artist's conception of Kepler 186f IMAGE, NASAIt’s 500 light-years away, but a recently found planet is the closest thing to Earth that astronomers have found yet. “Kepler 186f” is similar in size to Earth and, thanks to its position in the “Goldilocks zone” (neither too far nor too close to the star it orbits), its temperature is likely in the range suitable for liquid water and life. “Kepler 186f is the first validated, Earth-size planet in the habitable zone of another star,” Elisa Quintana of the SETI Institute and NASA’s Ames Research Center in Mountain View, California, said at a news conference announcing the discovery on Thursday (April 17). “It has the right size and is at the right distance to have properties similar to our home planet.” A paper detailing the findings was published last week in Science.

Earth-like exoplanets like Kepler 186f have been found before, and researchers still need to learn more about the planet before it can truly be considered a likely place for extra terrestrial life to exist. Researchers have not yet directly observed Kepler 186f, instead using the “transit method,” which detects the presence of a planetary body based on changes in the radiation coming from its star as it passes between the star and the telescope trained on it. So even though its size can be inferred, its mass cannot. “Because you don’t get the mass, you don’t know if it’s a big rock, or a small rock with a big, gaseous atmosphere,” theoretical astrophysicist Brad Hansen from the University of California, Los Angeles, who was not involved in the finding, told The Washington Post. And it’s not yet known whether Kepler 186f exhibits “tidal locking”—when the same side of the planet always faces its star. “It would have one sunny side and the other would be permanently dark, meaning it wouldn’t have an Earth-like climate,” Penn State University atmospheric scientist James Kasting, who was not a part of the Kepler team, told the Post.