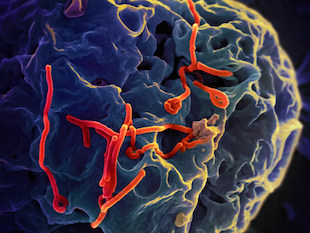 Ebola virus remains present in semen much longer than previously recognized, according to a study involving more than 400 men. The paper reporting the results was published in The Lancet Global Health on Tuesday (August 30). In one patient, researchers detected viral RNA 565 days after the patient recovered from symptoms. Previously, researchers believed Ebola virus lasted in semen up to nine months after recovery, STAT News reports.

Ebola can persist in a variety of tissues where the immune system is less active, even after the virus is no longer detectable in the blood stream. The virus might be transmitted after months of lying low, potentially sparking an outbreak in an area thought to be clear of Ebola. “A documented case of sexual transmission in Liberia six months after acute Ebola virus disease, along with accumulating evidence of similar events, remind us that even low levels of...

The genetic testing in the study could not ascertain whether RNA fragments persisting in semen came from a live, infectious virus. As Bausch and Crozier noted, the results should therefore be “interpreted with caution.” Regardless, the World Health Organization (WHO) has advised all male Ebola survivors be tested monthly until they test negative for Ebola twice.

The study was based on testing done by Liberia’s Men’s Health Screening Program, which Bausch and Crozier say “will have broad importance and provides opportunity for strengthening health systems” as the country works toward preventing future Ebola outbreaks.