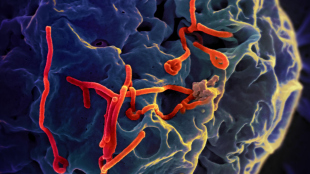 FLICKR, NIAIDAmber Vinson, a registered nurse who cared for a now-deceased Ebola patient in Dallas, flew to Cleveland between the time she treated her patient and when she developed symptoms. Vinson’s preliminary test results have come back positive for the infection, making her the second person to have contracted Ebola on US soil.

“She should not have traveled on a commercial airliner,” Thomas Frieden, the director of the Centers for Disease Control and Prevention (CDC), told reporters. “From this moment forward we will make sure that any individual who is being monitored” will not take public transportation.

Vinson flew on Frontier Airlines flight 1143 on October 13, and the CDC is contacting her fellow passengers to interview them about the flight and answer any questions, the agency said in a statement. Frieden said that because Vinson was not symptomatic at the time, the risk to others of catching...

The incident highlights what some are calling poor preparation by the US hospitals to grapple with a pathogen that has pummeled communities and medical teams in Africa. The Associated Press reported that National Nurses United received statements from nurses describing the situation at the Dallas hospital where Vinson’s patient, Thomas Eric Duncan, was cared for. “The union described how Duncan was left in an open area of the emergency room for hours. It said staff treated Duncan for days without the correct protective gear, that hazardous waste was allowed to pile up to the ceiling and safety protocols constantly changed.”

Vinson’s colleague, Nina Pham, who also cared for Duncan, was the first person to have contracted Ebola virus in the U.S. Federal health officials acknowledged that they should have had more experts present in Dallas. "We could’ve sent a more robust hospital infection control team and been more hands-on with the hospital from day one about exactly how this should be managed,’’ Frieden said.

Pham is being treated in Dallas, while Vinson will be cared for at Emory University Hospital in Atlanta.