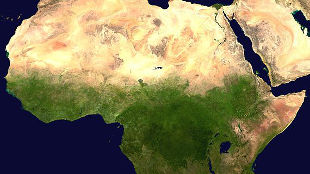 WIKIMEDIA, NASAJust two months ago, the World Health Organization (WHO) declared Liberia Ebola-free after more than a year of suffering from the ongoing outbreak in West Africa. But last week (June 28), a 17-year-old male died of an illness that had been managed as if it were malaria, and the following day a post-mortem swab test showed he had Ebola, according to a WHO statement. Such post-mortem testing is standard practice in the country, as Liberia—which remains at risk of importing the virus from the neighboring countries of Guinea and Sierra Leone—is under a 90-day period of vigilance that started in early May.

A follow-up inquiry found that the young man had been in contact with nearly 200 people while he was infected, two of which have tested positive for Ebola. These patients are now being treated and all 200 contacts are being closely monitored. Some households are under quarantine, and United Nations (UN) agencies such as UNICEF and the World Food Programme are providing food, bedding, and tents. The UN and nongovernmental organizations have also sent monitoring equipment to Liberia, and the WHO is sending experts in epidemiology and social mobilization in an effort to prevent further spread of the virus.