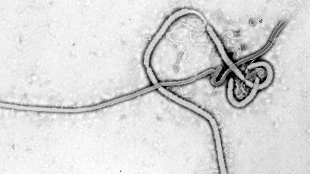 Transmission electron micrograph of the Ebola virusWIKIMEDIA, CDC, FREDERICK MURPHYAn ill woman who claims to have recently arrived from Africa was taken by ambulance to Virginia Hospital Center, and emergency measures are being carried out to ensure that, if Ebola is at fault, that the virus is not spread, ARLnow.com reported. Passengers on the bus have been in quarantine for the past three hours, but the mood on the bus is calm, according to my parents, George and Barbara Akst, who happened to be on the vehicle when the woman got on and off in the Pentagon parking lot.

The bus was parked and waiting at the Pentagon when my parents arrived this morning around 8:30 a.m. It was the second bus in a row of three, all waiting to shuttle people to this morning’s Change of Command ceremony for the Marine Corps Commandant.

The woman moved out of view at that point, but word eventually got back to the passengers that she had passed out. A hazmat team was called out of “a complete abundance of caution,” with regard to Ebola, a Pentagon Force Protection Agency spokesman Chris Layman told ARLnow.com.

The bus departed for the Marine Corps barracks at 8th and I Streets in Washington, DC, at 9:15, but when it arrived, the Marine Corps protocol officers told them to shut the door and stay on the bus. The passengers remained on the bus until 11:30, at which point they were transferred to a new bus, which did “not have any sanitizer [in] the bathroom,” my mom told me. “No soap and no water.” Authorities closed the street they are on, with cop cars blocking traffic and crime scene tape running across the street behind the bus. Then, at 11:45, supplies finally arrived: water, hand santizer, garbage bags, vitamin C pills, and granola bars.

The atmosphere is not panicked, my mom told me. “There is one young gentleman with a little concern because his wife is four-months pregnant . . . [but] everyone’s calm.”

Stayed tuned for more updates from my parents as this story unfolds. It seems like they aren’t going to make it to the Change of Command this morning after all.

Update (12:30 p.m., October 17): The police have asked all the bus passengers for their names, addresses, and telephone numbers. “Rumor is after they collect our info they will let us go and we will be under a 21 day watch,” my mom said in a text message.

Update (1:30 p.m., October 17): The passengers have all been released from the bus quarantine. A doctor from the DC Department of Health boarded the bus shortly before they were released and confirmed that the woman had thrown up in the Pentagon parking lot. All passengers are to take their temperature twice a day and report any symptoms that arise to their local health departments. If the woman is cleared of Ebola after a second test, the passengers can stop the precautions.

Update (1:35 p.m., October 17): My parents say they’re now headed home to Northern Virginia. The Pentagon parking lot is still closed, so they will have to pick up their car later. Stay tuned to The Scientist for continuing coverage of the science behind Ebola and the efforts to combat the disease.

Update (9:30 p.m., October 17): Earlier this evening, health department officials in Arlington and Fairfax Counties declared the “all clear” for the passengers of the bus. The woman who got ill on the bus did not have Ebola, they said; she did not even meet the criteria for testing, according to a statement on the Inova Fairfax Hospital’s website.

My parents received a call just before 8 p.m. this evening giving them the good news. They were told the woman had not recently traveled to any areas currently affected by Ebola, and that they do not need to monitor their temperatures in the coming days. “Just got a call . . . there is no concern,” my mom wrote in an e-mail.