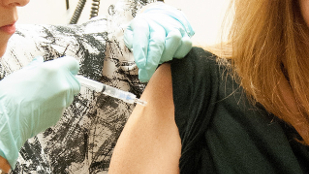 Study participant receives NIAID/GSK Ebola vaccine candidateFLICKR, NIAIDOne strategy to fighting the ongoing Ebola epidemic in West Africa—which to date has affected more than 18,000 people and killed nearly 7,000, according to the World Health Organization (WHO)—is to transfuse plasma or blood donated by Ebola survivors into those who have contracted the disease. The belief is that antibodies or other immune factors that helped the survivors clear the virus could help other patients still suffering the effects of the virus to join the 30 percent of people who don’t die from Ebola infection. Three trials to test this so-called convalescent blood therapy are now getting underway at the heart of the outbreak.

Most Ebola survivors could serve as donors if transfusions prove safe and effective in clinical trials. Vaccine makers, on the other hand, still face monumental production and distribution challenges, even if their candidates are successful in...

Late last week in Liberia, researchers collected plasma from survivors at the ELWA 2 hospital in Monrovia and transfused the first patient as part of the Bill & Melinda Gates Foundation-funded trial, which is being run by the Hinckley, Ohio-based contract research organization ClinicalRM, in collaboration with national health authorities and the WHO, Nature reported. Over the next 10 weeks, 70 patients will participate in the trial, including control patients who will not receive a transfusion. Researchers will then compare viral loads between treated and untreated patients.

Meanwhile, in Guinea, a large consortium of European and African research and blood-transfusion organizations, in collaboration with Doctors Without Borders, is set to begin a separate convalescent plasma therapy trial at the Donka Ebola treatment center in Conakry, with funding from the European Union and the Wellcome Trust. This trial, which is slated to begin later this month or early next, aims to enroll between 200 and 300 patients, again including a control group, and will compare survival rates two weeks after treatment. Finally, in Sierra Leone, the third country at the center of the epidemic, the group Sierra Leone Action hopes to begin collecting plasma later this month, in order to launch a third convalescent plasma trial.

In the United States, National Institutes of Health (NIH) researchers this week (December 15) announced the positive results from a small Phase 1 trial testing an Ebola vaccine, developed by the NIH’s National Institute of Allergy and Infectious Diseases (NIAID) and GlaxoSmithKline (GSK). The vaccine candidate, which consists of an adenovirus vector carrying bits of genetic material from two different Ebola strains, was well tolerated by all 20 volunteers (aged 18 to 50) who received the vaccine, and all produced anti-Ebola antibodies within four weeks of the injection. Moreover, the vaccine prompted the production of CD8 T cells in several of the volunteers. “We know from previous studies in nonhuman primates that CD8 T cells played a crucial role in protecting animals that had been vaccinated with this NIAID/GSK vaccine and then exposed to otherwise lethal amounts of Ebola virus,” NIAID’s Julie Ledgerwood said in a press release.

In one last bit of promising news: this week (December 16), epidemiologists from the Yale School of Public Health suggested that the number of unreported cases of Ebola is far lower than previously estimated, suggesting that the epidemic will not reach the staggering projections put forth earlier this year by the WHO Ebola Response Team, the US Centers for Disease Control and Prevention (CDC), and others. There is not enough information is available to make a confident prediction, the authors noted, but given the latest data from Sierra Leone and Liberia, they estimated that as few as 17 percent of cases in West Africa go unreported. As lead author Jeffrey Townsend told The New York Times, for every 100 known cases, the actual statistic is probably closer to 120—not 250, as earlier models had estimated.

In response, the CDC said that its September projection was “a first attempt to better understand to what extent underreporting was occurring in West Africa,” and based on the progression of the epidemic if no effective responses were initiated. The new study “further refines our understanding.”