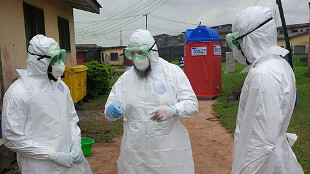 Ebola is no longer spreading exponentially in Liberia, US Centers for Disease Control and Prevention (CDC) Director Thomas Frieden announced last week (November 20), The New York Times reported. Frieden credited international aid efforts for curbing the spread of the infection, but stressed that similar responses were necessary to stem the epidemic in Guinea and Sierra Leone, which together continue to experience 1,000 to 2,000 new cases each week.

Meanwhile, aid organizations operating in West Africa are scrambling to obtain adequate supplies of personal protective equipment (PPE) for health-care workers, as well as other items, including powdered bleach and medical rehydration supplies. The CDC and US hospitals have bought up large stockpiles of these products in preparation for more potential cases of Ebola in the U.S., while groups such as Doctors Without Borders and World Vision, a Christian humanitarian organization, face shortages.

As on-the-ground efforts to quarantine and treat Ebola victims continue, several companies are making steady progress with the development and testing of candidate vaccines. Merck & Co. announced this week (November 24) that it had acquired the rights to rVSV-EBOV, which uses an attenuated version of the vesicular stomatitis virus. The candidate vaccine was originally developed by the Public Health Agency of Canada and was previously licensed to NewLink Genetics, which will partner with Merck going forward. Phase 1 clinical trials for rVSV-EBOV are in progress in the U.S. and are planned for Europe and Africa.

Although Ebola has infected at least 15,000 people and claimed the lives of more than 5,000 (according to the latest World Health Organization report), other diseases have broader effects and receive less media coverage, David Robert Grimes argued in a commentary at The Guardian this week (November 24). Across Africa, people are still dying from malaria, tuberculosis, and malnutrition in far greater numbers, he wrote.