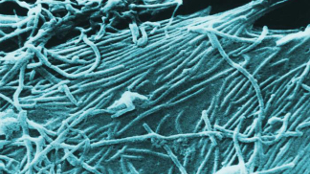 Ebola virionsWIKIMEDIA, PLOS BIOLOGYThe World Health Organization (WHO) announced at a news conference in Geneva this week (October 21) that two experimental Ebola vaccines, already undergoing Phase 1 clinical trials in the United States and other countries outside of the affected zone, could be entered into large-scale trials in West Africa in January. Meanwhile, three other vaccines are expected to begin safety testing in regions outside the epidemic by March.

In preparation, Johnson & Johnson, which is co-developing one of the experimental vaccines with the Danish company Bavarian Nordic, is committing $200 million to the program; the firms aim to produce as many as 250,000 doses by May and a million total next year. “Typically, you don’t make hundreds of thousands of vaccines before you know what the safety and immunogenicity is,” Paul Stoffels, chief scientific officer of Johnson & Johnson, told The New York Times. “This...

In addition to these vaccine development efforts, Marie-Paule Kieny, assistant director general for health systems and innovation at the WHO, noted on Tuesday that serum from the blood of recovered Ebola patients, which contains antibodies that can attack the virus, could be available in Liberia within weeks, BBC News reported. María Teresa Romero Ramos, the Spanish nurse who was the first to contract Ebola outside of West Africa, was reportedly treated in this way, along with an undisclosed experimental drug, and on Tuesday she was declared virus-free, The Guardian reported.

In the U.S., the Obama administration continues to heighten precautionary measures to prevent the import and spread of Ebola in the country. Most notably, the five US airports that recently implemented a new screening strategy for identifying people at risk of carrying the virus will now be the only five airports accepting flights from West Africa. “We are continually evaluating whether additional restrictions or added screening and precautionary measures are necessary to protect the American people, and will act accordingly,” Homeland Security Secretary Jeh Johnson told The Wall Street Journal.