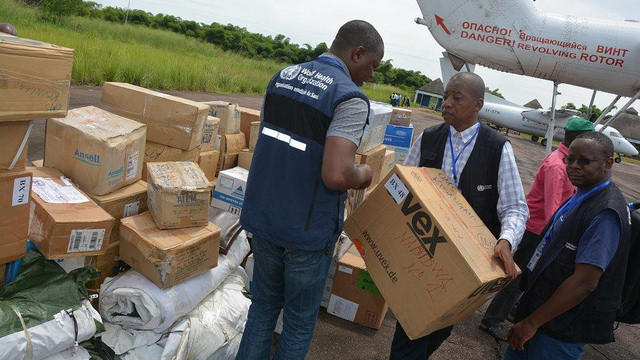 World Health Organization workers deployed medical kits in response to reports of Ebola cases in DRC in 2017.FLICKR, MONUSCOThe US government has committed another $7 million in funds to fighting Ebola in Democratic Republic of Congo, bringing its total contribution to $8 million, according to a press statement yesterday (May 22) by US Secretary of Health and Human Services, Alex Azar. The announcement comes amid reports of another two deaths from the virus in an outbreak that has killed 27 people since April, prompting the first deployment of an experimental vaccine in the region this week.

“The risk of spreading within the country and to neighboring nations remains real,” Fatoumata Nafo-Traoré of the International Federation of Red Cross and Red Crescent Societies tells Reuters. “One of the lessons we learned in our response to other deadly Ebola outbreaks is that complacency can kill.”

Health authorities were widely criticized for failing to respond more quickly to the outbreak of Ebola in West Africa, which claimed more than 11,000 lives between 2013 and 2016. A much faster response to news of eight confirmed cases and four deaths in Democratic Republic of Congo (DRC) early last year resulted in the World Health Organization (WHO) declaring that outbreak over within a few months.

Cases began reappearing in DRC in the rural town of Bikoro earlier this year. The current outbreak has now spread to Mbandaka, a well-connected port city with a population of around 1.2 million. This time, however, health workers have access to an experimental vaccine, Merck’s rVSV-ZEBOV, which saw its first deployment in DRC on Monday (May 21). “I think it’s important that we have something to offer now and something that hopefully helps to contain this terrible disease,” the vaccine’s designer Heinz Feldmann tells STAT News.

Merck has supplied the WHO with 8,640 doses of the vaccine—which has completed Phase 3 trials but has yet to receive regulatory approval—with another 8,000 on their way, Reuters reports. Meanwhile, the WHO is also consulting various health organizations about the use of additional experimental drugs, including antibody and antiviral treatments, for people who have already been infected, Nature reports.

“If we’re lucky and the disease doesn’t spread, the outbreak will be quickly resolved and we will have to use few experimental products,” Annick Antierens of Médecins Sans Frontières tells Nature. “But if we’re unlucky we’ll need to use them.”