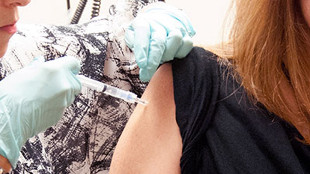 The National Institute of Allergy and Infectious Diseases (NIAID) of the US National Institutes of Health has partnered with the pharmaceutical company GlaxoSmithKline (GSK) to boost the development of a candidate Ebola vaccine that uses a modified chimpanzee adenovirus to deliver viral glycoprotein antigens. Following the demonstration that the vaccine protected non-human primates from Ebola infection, the NIAID began a Phase 1 trial of the vaccine at the NIH Clinical Center in Bethesda, Maryland, in September.

Researchers reported last week (November 26) in The New England Journal of Medicine that the vaccine elicited immune responses in 20 adult volunteers who received two different doses and did not cause serious adverse events. The vaccine is on track to be tested in health-care workers in West Africa by early next year.

In the preliminary Phase 1 trial, two of the 10 study participants who received a higher vaccine dose briefly experienced...

“We know from previous studies in non-human primates that CD8 T cells played a crucial role in protecting animals that had been vaccinated with this NIAID/GSK vaccine and then exposed to otherwise lethal amounts of Ebola virus,” study coauthor Julie Ledgerwood said in a press release. “The size and quality of the CD8 T cell response we saw in this trial are similar to that observed in non-human primates vaccinated with the candidate vaccine.”

Among several candidate Ebola vaccines currently under development, the NIAID/GSK vaccine is the furthest along. However, Bruce Aylward, a physician with the World Health Organization, cautioned that vaccine development is just one facet of the international strategy to fight the Ebola epidemic.

“The vaccines are really, really important, but we still have to do everything else,” said Aylward, according to The Hill. “There’s a big risk that people think it's going to solve the problem. It’s not.”