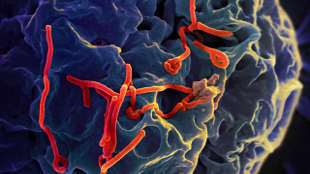 Ebola virusFLICKR, NIAIDThe Makona strain of Ebola virus that caused the recent outbreak in West Africa, killing more than 11,000 people and sickening even more, is apparently less virulent than the Mayinga strain isolated in Central Africa in 1976, according to a study of macaques published today (June 9) in the US Centers for Disease Control and Prevention journal Emerging Infectious Diseases.

Researchers from the US National Institutes of Health and Bernard-Nocht-Institute for Tropical Medicine in Hamburg, Germany, infected three cynomolgus macaques with the 1976 Mayinga strain and another three with the 2014 Makona strain. Both groups of animals began shedding virus within three days of being infected, but those infected with the Mayinga virus progressed more quickly. On day four, they presented with a rash; by day six, they were extremely ill. These same symptoms appeared in monkeys infected with the Makona virus two days later—at...

“The main message is . . . it’s certainly not worse and it may be less virulent,” Anthony Fauci, director of the NIH’s National Institute of Allergy Infectious Diseases told USA Today. “It’s good news.” The findings suggest that the magnitude of the outbreak is not a result of the virus itself, as much as a “perfect storm” of factors, including its spread in densely populated cities with poor health-care systems, Fauci added.

In their paper, the researchers also noted that the macaques infected with the Makona virus produced about three times as much interferon gamma as the monkeys infected with the Mayinga strain. More studies are needed to explain this greater immune response to the Makona strain, but the team suspects Mayinga infection may progress too quickly for a full response to be mounted.