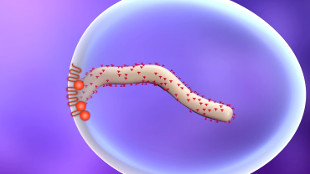 Ebola virus particle trapped inside a lysosome interacts with the transmembrane protein NPC1 to gain access to the rest of the cellYOUTUBE, ALBERT EINSTEIN COLLEGE OF MEDICINE

The protein Niemann-Pick C1 (NPC1) is typically responsible for transporting cholesterol into cells, and people with certain mutations in the gene encoding it develop a degenerative disease caused by cholesterol buildup inside lysosomes. Researchers working in the U.S. and the Netherlands previously found that Ebola and other filoviruses hijack NPC1 to enter human cells. In a study published in mBio this week (May 26), the same team reported that mice lacking NPC1 are completely resistant to Ebola infection.

“Our study reveals NPC1 to be an Achilles’ heel for Ebola virus infection,” microbiologist and study coauthor Kartik Chandran of the Albert Einstein College of Medicine in New York City said in a statement.

When Ebola first enters a host cell, it is...

Treating NPC1-deficient mice with a drug that restored cholesterol clearance also had no effect on the animals’ resistance to Ebola, unlinking NPC1’s role in infection from its vital cellular function.

The team also tested two drugs known interfere with the activity of NPC1: Imipramine, which is a US Food and Drug Administration-approved antidepressant, and U18666A. Both drugs reduced the amount of virus recovered from the sera and organs of Ebola-infected mice, though neither improved survival.

The group continues to pursue NPC1 as promising therapeutic target. “The underlying story of an Ebola infection is that your immune system and the virus are in a race. If you can do anything to control the amount of virus that is in the system, keep it below a certain threshold, your immune system in many cases will win that race,” study coauthor John Dye, an immunologist at the US Army Medical Research Institute of Infectious Diseases, told the Daily Mail.