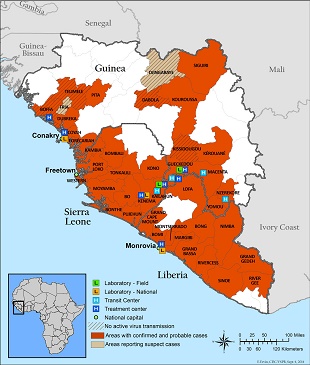 CDC, E.ERVINThousands of new Ebola cases in Liberia are expected in the next three weeks, an exponential increase that suggests conventional interventions for stopping the virus’s spread there are insufficient. In a statement issued this week (September 8), World Health Organizations (WHO) officials said that “the demands of the Ebola outbreak have completely outstripped the government’s and partners’ capacity to respond.”

The assessment was the result of a weeks-long investigation by WHO emergency experts, local health officials, and the Liberian government. The country has been one of the hardest-hit by the ongoing epidemic: Liberia has the highest total number of Ebola cases and fatalities, with nearly 2,000 cases and more than 1,000 deaths through September 8. Fourteen of 15 counties in the country have reported infections.

More than 150 infections have occurred in healthcare workers, 79 of whom have died. “When the outbreak began, Liberia had only 1 doctor...

Focusing on Montserrado County, home to the country’s capital and more than 1 million residents, the WHO team estimated that approximately 1,000 beds are needed to treat people who are currently infected. But only 240 are available. The team’s results highlighted the need for much greater community engagement in rural areas, and the need to scale up current efforts by three- to four-fold.

Governments across the world are gradually stepping in with aid. The Pentagon announced plans for a 25-bed field hospital in Liberia; the $22 million facility is being provided through the US Agency for International Development, according to The Washington Post. The Post also reported that the British government plans a 62-bed Ebola treatment center in Sierra Leone, which is expected to be ready for use in two months.

But conditions in Liberia remain precarious. Brice de le Vinge, operations director for Doctors Without Borders, told the Washington Post: “We are overstretched physically, and we have people dying at our doorsteps every day.”