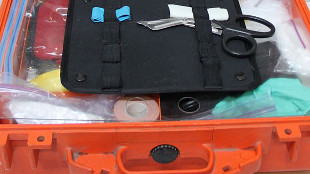 The WHO cites inadequate access to protective equipment among the reasons more than 240 healthcare workers have been infected with Ebola to date.WIKIMEDIA, RILEY HUNTLEY

A Liberian doctor who was treated with an experimental serum for Ebola has died. According to BBC News, Abraham Borbor, the deputy chief medical doctor at the Liberia’s John F. Kennedy Medical Center, was one of three doctors in the country who received ZMapp “and were showing signs of recovery.” But Borbor “took a turn for the worse” on Sunday (August 24), Liberian Information Minister Lewis Brown told the BBC. “What this means for the drugs, I don’t know.”

Both American healthcare workers who were treated with ZMapp on US soil have recovered and left the hospital. A Spanish priest who received ZMapp died in Spain shortly after treatment. The Associated Press noted that information on the other two Liberian doctors who received...

Borbor was the second John F. Kennedy Medical Center doctor to have died of Ebola virus disease, FrontPageAfrica reported. According to the World Health Organization (WHO), more than 240 health care workers have developed Ebola virus disease in Guinea, Liberia, Nigeria, and Sierra Leone; more than 120 have died.

“Several factors help explain the high proportion of infected medical staff,” the WHO said in a statement. “These factors include shortages of personal protective equipment or its improper use, far too few medical staff for such a large outbreak, and the compassion that causes medical staff to work in isolation wards far beyond the number of hours recommended as safe.”

Meanwhile, the Democratic Republic of Congo this week became the fifth country in which Ebola infection has been confirmed. While the infections reported there are not thought to be tied to the ongoing outbreak in West Africa, health officials are setting up a quarantine zone to contain the disease, the BBC reported.

Correction (August 26): This article has been corrected to reflect that Phillip Zokonis Ireland, who was in isolation with Borbor but did not receive ZMapp, has left the hospital. An earlier version erroneously identified Zokonis Ireland as the second John F. Kennedy Medical Center doctor to have died of Ebola virus disease. It was Samuel Brisbane who died. The Scientist regrets the error.