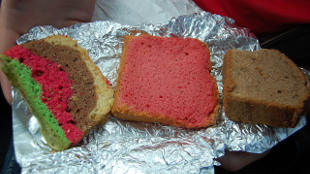 Edible marijuana products, such as these cakes, may contain more or less THC than their labels indicate.WIKIMEDIA, STAS2KIn US states where marijuana has been legalized—either for medicinal or recreational purposes—foods, drinks, and candies containing tetrahydrocannabinol (THC), the psychoactive compound in weed, have become very popular. But buyers beware: in a paper published in the Journal of the American Medical Association yesterday (June 23), researchers show that only 17 percent of 75 the edible medical marijuana products they tested had labels that accurately reported the amount of THC they contained.

Twenty three percent of the products, which were purchased in Seattle, San Francisco, and Los Angeles, contained more THC than their labels reported, and 60 percent contained less. “We need a more accurate picture of what’s being offered to patients,” Donald Abrams, hematology and oncology chief at San Francisco General Hospital who was not involved in the new study,...

Mislabeling edible cannabis products—consumed by an estimated 16-26 percent of medical marijuana patients, according to the study authors—can be dangerous for patients, as an unexpectedly high THC concentration can cause anxiety, vomiting, or hallucinations, while too low a dose can fail to treat symptoms. “If we want to recommend cannabis as medicine, patients should expect reliability and consistency in what they’re buying,” Vandrey told The Seattle Times. “The failure to do so is an injustice to the consumer and puts patients at risk.”

Because medical marijuana products remain illegal at the federal level, they are not subject to Food and Drug Administration regulation. Many states where marijuana is legal do not require manufacturers or dispensaries to test the products they sell. Some states are pushing for stricter testing guidelines for medical marijuana.