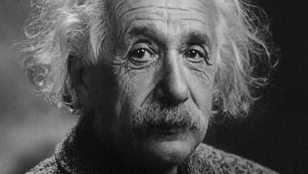 Wikimedia, Library of CongressPhotographs of Albert Einstein’s brain, taken shortly after his death but never previously released to the public, have revealed several unusual topographic features that may explain why the physicist was so clever, according to a study out last week (November 16) in Brain.

After Einstein died in 1955, pathologist Thomas Harvey removed and preserved the physicist’s brain. He took dozens of black and white photos from various angles before the brain was cut into 240 blocks, from which histological slides were prepared and sent to leading neuropathologists. Most of this material seems to have been lost over the years, but in 2010 what remains of Harvey’s private collection was given to the US Army's National Museum of Health and Medicine in Silver Spring, Maryland.

Having obtained 14 photographs from the collection, anthropologist Dean Falk from Florida State University and colleagues compared the folds and grooves...

“These [brain features] may have provided the neurological underpinnings for some of his visuospatial and mathematical abilities,” said Falk in a press release.