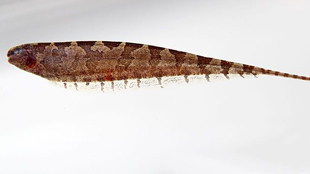 Two new, closely related, species of electric fish of the family Hypopomidae—represented here by Steatogenys elegans, have been discovered in the Amazon.WIKIMEDIA, CLINTON AND CHARLES ROBERTSON

Despite nearly indistinguishable outward physical appearances, the electric discharge signals of two newly discovered species of closely related fishes are quite different. Both electric fish belong to the bluntnose knifefish family; one has a direct current (DC) discharge, whereas the other has an alternating current (AC) discharge. The findings were published Wednesday (August 28) in Zoo Keys.

Until the discovery of one of the two new bluntnose species, Brachyhypopomus bennetti, the electric eel—which is not technically an eel—was the only fish known to produce a monophasic or DC discharge. The other new species, Brachyhypopomus walteri, produces the more common AC discharge that has both a positive and negative phase component. The species also have different tail morphologies.

"If it weren't for these traits, we undoubtedly would have thought they were a single species,” John Sullivan, a biologist at Cornell University said in a statement.

Sullivan and his team speculated that the harmless electric discharge of B. bennetti evolved to mimic that of the electric eel, whose powerful discharges keep electroreceptive predatory fish at bay. The researchers also suggested another advantage of the monophasic (DC) discharge of B. bennetti: even damaged electric organs can produce this discharge—an important adaptation for a creature whose tail gets munched on a regular basis.