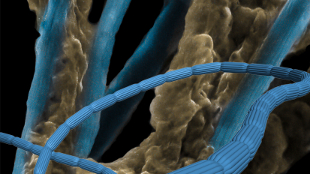 Cable bacteria in the mud of the sea bottom
Mingdong Dong, Jie Song and Nils Risgaard-Petersen Bacteria living in sediments at the bottom of Aarhus Bay in Denmark can exchange electrons with other bacteria as far as 1 centimeter away—the equivalent of 12 miles if the bacteria were the size of people, Wired Science reported. The electrical signals are passed through long strands of the bacteria—a new species of the genus Desulfobulbaceae—that serve as transport cables for the community.

“To move electrons over these enormous distances in an entirely biological system would have been thought impossible,” co-author Moh El-Naggar, assistant professor of physics at the University of Southern California , said in a press release. But the bacteria seem built for the job. Cells line up end-to-end to form a single long filament. The outer surface of the cells are ribbed, and the researchers suspect these channels are...

The study, published yesterday (October 24) in Nature, adds to a growing body of literature on bacteria using electricity to communicate and survive. Earlier this year, Japanese researchers found that different species of microbes utilize minerals in the soil to transport electrons long distances. Other bacterial species have long extensions, known as nanowires, that also play a role in conducting electricity among the community. But the new Desulfobulbaceae species appears to be the first to physically link individuals together to create an ideal electrical cable.

The researchers suspect the Desulfobulbaceae filaments serve to help the bacteria respire and eat, with cells deeper in the sediment collecting and oxidizing hydrogen sulfide and cells closer to the surface gathering and using oxygen from the seafloor. “You have feeder cells on one end and breather cells on the other, allowing the whole living cable to survive,” El-Naggar said in the release. The bacteria in the filaments are so dependent on one another, they could be considered a single multicellular organism, co-author Lars Peter Nielsen of the Aarhus Department of Bioscience told Wired.