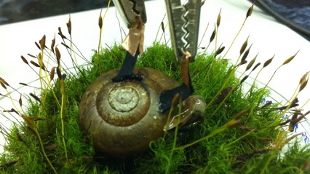 Turning living organisms into electricity-generating “devices” that could power small electronics, such as pacemakers, insulin pumps, even spy cameras and eavesdropping microphones. While “such bioelectronic systems are still exotic and very challenging to design,” wrote the authors of a new report published last week (May 23) in the Journal of the American Chemical Society, it has been successfully achieved in a handful of organisms, including cockroaches, rats, rabbits—and now snails.

The new snail system consists of two enzyme-coated electrodes that penetrated the animal’s shell—one that converts glucose to electrons, and another to take up those electrons and donate them to the positive ions ciriculating the in the snail’s hemolymph (blood). The voltage difference generated between the electrodes is 0.53 volts, which can generate power of a few microwatts—on par with the solar cells that generate some calculators and watches, ScienceNOW reported.