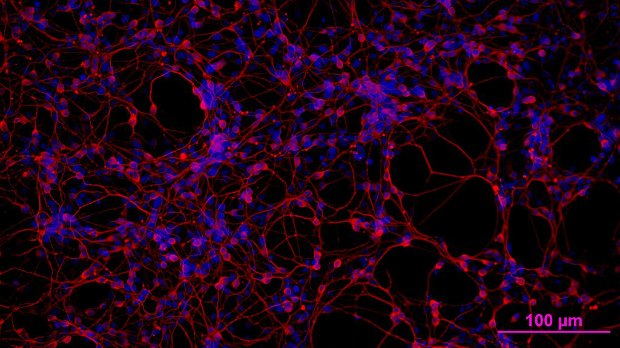 WIKIMEDIA, CHEMPETITIVETen years ago, optogenetics started out as a means to stimulate neuronal activity without the use of electrodes: a genetically introduced light-sensitive membrane channel and a blue light could do the job. At the Society for Neuroscience (SfN) meeting in Chicago this week, scientists announced new techniques for recording neurons optically, as well, obviating the need for invading cells or tissues with electrical probes altogether.

The basic approach is to express genes for a light-sensitive channel and an optical reporter in the same cell. For instance, researchers have succeeded in using genetically introduced calcium indicators, which signal action potentials, to record cell activity upon optogenetic stimulation.

To get an even more refined look at cell activity, particularly at the sub-action potential level, Adam Cohen’s team at Harvard University has developed an optical voltage indicator, called QuasAr, which glows in the near infrared upon changes in cellular voltage (voltage...

Cohen is applying his all-optical approach to induced pluripotent stem cells from people with amyotrophic lateral sclerosis and developing ways to work it in vivo. Just this month, his team recorded neuronal activity using a modified QuasAr in the olfactory bulb of mice for the first time. He said the next step is to apply an optical stimulator in tandem with the reporter in vivo.

“The dream is to start doing recordings in intact neural circuits to see how a single neuron takes its inputs and combines those inputs and then decides whether or not to fire,” Cohen told The Scientist.

While voltage indicators offer valuable refinements on all-optical approaches, they’re technically more difficult to work with than calcium indicators, Cohen said, noting that scientists working with calcium reporters are already doing behavioral studies while he has only just begun in vivo recordings.

The challenge with voltage indicators, he explained, is that they are quite dim (50 times less bright than green fluorescent protein), and the rapid time scale means needing to image at extremely short exposure times. “We’re always starved for photons,” he said. Depth penetration is also an enormous challenge—there’s really no way yet to record from deep within the brain. “The key here is to push in parallel the optics, the proteins, and the software for the analysis.”

Cohen and several other all-optical developers wrote a summary describing the field’s progress in last week’s Journal of Neuroscience, calling the technique a “new paradigm” for probing the neural functions underlying behavior. “Ultimately,” the authors wrote, “by enabling neural circuits to be both recorded and manipulated with the spatial and temporal precision on which they operate during behavior, this approach should yield new insights into the nature of the neural code.”