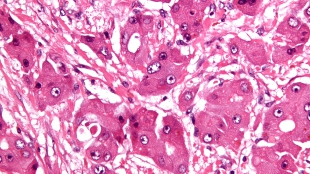 Researchers have demonstrated that small doses of electromagnetism can shrink liver and breast cancer cells without harming surrounding tissues, according to a report published recently in the British Journal of Cancer.

An international team, led by University of Alabama at Birmingham oncologist Boris Pasche, has shown that low-intensity electromagnetic fields can slow the proliferation of and hepatocellular carcinoma (HCC) cells, which are involved with a deadly form of liver cancer, and breast cancer cells. The researchers used radiofrequency electromagnetic fields that were about 27 megahertz—100 to 1,000 times weaker than the fields generated by cell phones. "This is a truly novel technique," Pasche told The Guardian. "It is innocuous, can be tolerated for long periods of time, and could be used in combination with other therapies."

The new study follows up on clinical work the team published...

Pasche told The Guardian that the US Food and Drug Administration had granted permission for him to carry out more trials on larger groups of patients.