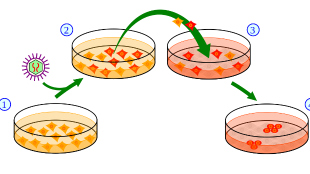 WIKIMEDIA, Y TAMBEScientists published data last month (September 23) in ACS Nano that showed exposing mouse fibroblasts to low frequency electromagnetic fields improved the efficiency of reprogramming them to a pluripotent state by enhancing histone methylation. Improving the efficiency of induced pluripotency would certainly be welcome in the field, but much of the discussion—at least in online fora—has skewed toward skepticism.

“[What] I have trouble with is the mechanism by which an enzyme gets induced by low-frequency electromagnetic fields, and that's always been the basic argument against such things,” Derek Lowe wrote at his blog, In the Pipeline, this month (October 14). “I don’t know what to make of this paper, does anyone?” he asked.

The PubPeer community appears to have responded to Lowe. At the online post-publication peer review site, commenters have expressed their doubts and picked apart potential problems with figures appearing in the paper. Jongpil Kim, the senior author of the study and a professor at Dongguk University in Korea, responded to the concerns and set up his own challenge for the community: “[T]o immediately discount the validity of the findings without actually attempting to reproduce the central experimental finding is not only non-scientific, but borders on slanderous,” Kim wrote. “We suggest that these individuals take their skepticism to the laboratory bench so that something productive can result from the time they invest prior to their criticizing the work of others.”