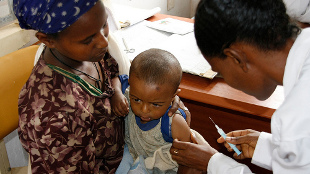 Nearly all of the limited healthcare resources of Liberia, Guinea, and Sierra Leone were diverted last year to cope with the Ebola crisis, leading to a drop in vaccination rates that could portend bigger measles outbreaks in the future, according to a study published this week (March 12) in Science.

Each measles patient can transmit the disease to an estimated 12 to 18 people. To understand how a reduced vaccination rate might affect future measles outbreaks, researchers from the Johns Hopkins Bloomberg School of Public Health, Princeton University, Penn State University, and the University of Southampton modeled the impact of a 75 percent decrease in vaccination rate over 18 months of the Ebola epidemic.

The scientists found that such a drop in the vaccination rate could lead to 1.1 million unvaccinated children between the ages of nine months and five years in the region, a 45...

In 2013, vaccination rates in the region were between 62 percent and 83 percent, while in 2014, 58 percent of Liberian children under the age of one were vaccinated. This suggests the vaccination rate drop may be lower than the original model assumed, but any drop could still have a serious impact. “Even if the reduction is only 25 percent, the same methods find 500 to 4,000 additional deaths compared to what would have happened at baseline,” study coauthor Justin Lessler of Johns Hopkins told Scientific American.

“Measles is not the only health threat that’s been made worse by the Ebola crisis. It may not even be the worst,” Lessler told The Washington Post. “But it’s certainly one we can do something about.”

Managing measles will require sustained resource pledges even after the last Ebola case, Paul Farmer of Harvard Medical School, who was not involved in the study, said last week (March 5) at a symposium on the Ebola response.