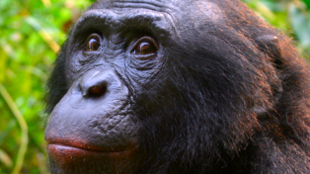 Wikimedia, EvanmacleanAn ape research facility in Des Moines, Iowa, has reinstated a controversial researcher following an internal investigation into claims that she was not properly looking after the bonobos in her care.

In September, the Iowa Primate Learning Sanctuary (IPLS) placed then executive director Susan Savage-Rumbaugh—a pioneer in human-ape communication—on administrative leave and launched an investigation after former employees alleged that her behaviour put the apes at risk. The 12 whistleblowers accused Savage-Rumbaugh of allowing incestuous copulations between the apes, forgetting where she had left the apes, locking them outside without access to water for hours at a time, and exposing them to people without the necessary vaccinations, among other allegations.

Earlier this month (November 6), an adult female called Panbanisha died of a respiratory illness, which prompted anthropologist Barbara King of William and Mary College—who has spent time with the apes at IPLS—to write to the sanctuary’s board...

But last week (November 20) the IPLS board announced that its internal investigation committee “found that the bonobos are well cared for and was unable to substantiate the allegations against Dr. Savage-Rumbaugh, in part because they encountered significant counterevidence against the claims.” The board reinstated Savage-Rumbaugh as resident scientist but made veterinarian Julie Gilmore executive director to provide constant “veterinary guidance and oversight.”

In response, lawyers for 11 of the 12 whistleblowers have asked to see documents related to the investigation, as well as those from a similar investigation conducted in 2011. “The former employees continue to suggest to the Board that an internal investigation may not be sufficient under the circumstances,” said a statement from Dickey & Campbell Law Firm in Des Moines, according to ScienceInsider. “An external, transparent investigation would be prudent in the wake of Panbanisha's recent death."

Barbara King agreed. “I don’t find it as easy to dismiss the documented concerns of the [whistleblowers] as those who voted on these matters,” she told Scientific American. “The bonobos deserve that hard questions get asked; they also deserve a proper, external investigation into the [whistleblowers′] observations and evidence.”