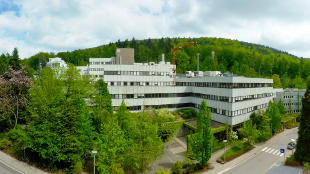 EMBL's headquarters in Heidelberg, GermanyWIKIMEDIA, MAGNUS MANSKEOne of Europe’s largest life-science research institutions, the European Molecular Biology Laboratory (EMBL), is embracing open access. The Heidelberg, Germany-based EMBL has instituted a broad open-access publishing policy that went into effect this week (June 15). EMBL-affiliated scientists must now make their peer-reviewed papers available on the open-access Europe PubMed Central within six months of publication in a journal, according to the new policy. What’s more, the institution is encouraging researchers to publish their work with a Creative Commons with attribution (CC-BY) open-access license to enable text analytics and text mining in the future. “Recognition for influential work is part of the social fabric of science,” Jo McEntyre, head of literature services at EMBL’s European Bioinformatics Institute (EMBL-EBI), said in a statement. “Scientists, institutes and funders all want to be acknowledged when they have played a role, so having research outputs accessible without barrier—and properly attributed—is essential. But the open-access policy is about much more than that—it also encourages people to make their research reusable, so it can be explored and re-analysed in different contexts as new methods and technologies come online.”

The EMBL policy resembles a similar mandate in the U.K., which has required all government-funded researchers and their collaborators to publish their papers in open-access repositories 2013. The U.S. National Institutes of Health has required that its grantees deposit published work in open-access PubMed Central since 2008.