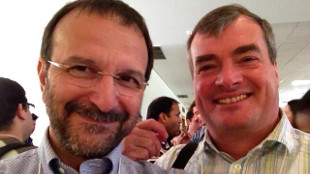 Richard Elliott, who studied viruses and emerging diseases at the MRC-University of Glasgow Center for Virus Research (CVR) died earlier this month (June 5). He was 61.

Elliot held the Bill Jarrett Chair of Infectious Diseases at the CVR and was well-known for his work with bunyavirus, an arbovirus that infects arthropods and vertebrates.

Elliott studied viral replication as a PhD student at the University of Oxford and spent his postdoc at Mount Sinai Hospital in New York City, studying influenza viruses. He became a professor of molecular biology at the University of Glasgow in 1995 and the institution’s joint head of virology in 1998. In 1996, he coauthored the first study demonstrating the production of an infectious RNA virus using complementary DNA.

“It proved very difficult to make infectious DNAs of negative strand RNA viruses, and it was Richard...

Elliot also taught and conducted research at the University of St. Andrews as a professor of virology between 2005 and 2013.

In a tribute posted to the CVR blog, a group of Elliott’s colleagues wrote: “Richard was an inspiration and mentor to many people who benefited from his scientific knowledge and experience. His drive and commitment did not waver to those around him in the last months of his life after diagnosis of a terminal illness. . . . He always said to members of his laboratory, and continued to emphasize during his illness, that the best they could do for him was ‘to work hard and get results!’”

Richard is survived by his wife, two daughters, and his parents.