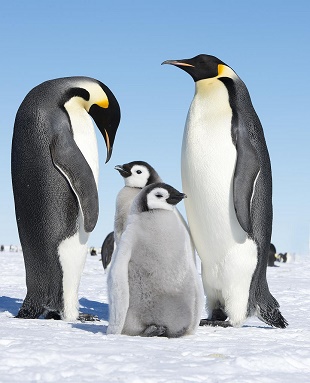 FLICKR, CHRISTOPHER MICHELEmperor penguin populations are on a slippery slope. Global colonies could lose nearly one-fifth of their members by the end of the century as a result of climate change, according to a study published this week (June 29) in Nature Climate Change.

Conservation biologists report the species’ population is currently stable. But emperor penguins need a certain amount of sea ice to survive. Too much sea ice increases the distances parents must travel to feed their chicks. Too little ice, however, reduces places to hide from predators, and decreases amounts of food sources such as krill, the tiny shrimp-like creatures that sustain penguins.

Biologist Hal Caswell from Woods Hole Oceanographic Institution in Massachusetts and his colleagues combined climate models to predict sea-ice changes with demographic data from a well-studied colony of penguins at Terre Adélie in East Antarctica. They found nearly 75 percent of colonies...

Most colonies were predicted to remain stable until approximately 2050; those around the Ross Sea would increase, according to the researchers’ results. However, a global decline was predicted by 2100, with colonies in the Eastern Weddell Sea and Western Indian Ocean most severely affected.

“We can see that at some point in the future the effects are going to build up, become really negative, and start pushing the species toward extinction,” Caswell told Smithsonian magazine. “Does that mean that it should be considered endangered because we can see that coming even though it hasn’t started yet—or not?”

Although global warming spells trouble for the species, emperor penguins may have the capacity to adapt.

“It appears that the emperors have the ability to move among colonies,” Michelle LaRue of the University of Minnesota, St. Paul, told New Scientist. Recent work out of her lab has suggested the birds may migrate to better breeding grounds, forming new colonies from old ones.

“Our research showing that colonies seem to appear and disappear throughout the years challenges behaviors we thought we understood about emperor penguins,” LaRue said in a statement. “That means we need to revisit how we interpret population changes and the causes of those changes.”