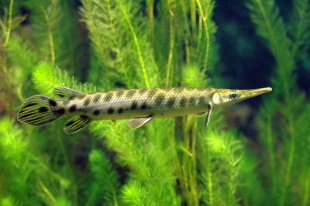 Spotted gar, L. oculatusWIKIMEDIA, TINO STRAUSSEnamel is the hardest tissue in the body—and nearly all land animals produce it to protect their teeth. But until now, its origins had remained a mystery. In a Nature study published this week (September 23), researchers offered evidence for early enamel in the scales of fish that lived more than 400 million years ago.

Researchers from Sweden and China first examined the recently sequenced genome of a fish called the spotted gar (Lepisosteus oculatus) and discovered two of the three genes associated with enamel production in other animals. These genes were expressed in the gar’s skin, where its scales produce an enamel-like substance called ganoine.

Investigating whether enamel could have originated in fish scales, the team used scanning electron microscopy to take a closer look at an ancient bony fish, Psarolepis romeri. The researchers observed incremental lines and crystals...

“In us, enamel is only found on teeth, and it is very important for their function, so it is natural to assume that it evolved there,” study coauthor Per Ahlberg told Reuters. However, he explained in a press release, “it seems that enamel originated in the skin, where we call it ganoine, and only colonized the teeth at a later point.”

The results “show us the strange paths that evolution can take, co-opting a tissue from one part of the body to play a quite different role in another, and then abandoning the original role altogether,” Ahlberg told The Washington Post. “Looking at our own teeth, and the important role that enamel plays in their function, you would swear that the tissue had evolved there; and yet it did not.”

The findings are “very interesting,” Zerina Johanson, a paleobiologist at the Natural History Museum in London who was not involved with the work, told Science. “This may provide a better understanding of what was going on inside primitive vertebrates.”