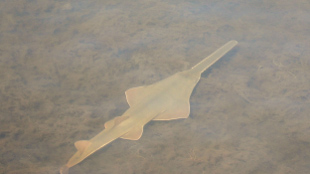 A type of asexual reproduction called parthenogenesis, in which an unfertilized egg develops into an embryo, has been observed among some species of birds, sharks, and reptiles in captivity. A report published yesterday (June 1) in Current Biology shows the first genetic evidence of wild-born parthenogenic offspring of a normally sexual vertebrate—the critically endangered smalltooth sawfish (Pristis pectinata).

“We were conducting routine DNA fingerprinting of the sawfish found in this area in order to see if relatives were often reproducing with relatives due to their small population size,” study coauthor Andrew Fields, a graduate student at Stony Brook University, said in a statement. “What the DNA fingerprints told us was altogether more surprising: female sawfish are sometimes reproducing without even mating.”

Fields and his colleagues conducted DNA fingerprinting on 190 smalltooth sawfish sampled in southwest Florida between 2004 and 2013. The...

A closer look led the researchers to find that the chromosome pairs of these seven fish were identical at least 14 of the 16 loci examined, and the extremely low probability of that happening during normal sexual reproduction indicated that these fish had mothers but no fathers. All seven of the parthenogenic fish were female, and five of them that were caught and measured around the same time were siblings. Because they were sampled and examined as juveniles, it is unclear whether these fish are able to reproduce.

The results raise the question of whether a dwindling population size could contribute to parthenogenesis in P. pectinata. The DNA fingerprinting analysis used in the study could enable researchers to identify the phenomenon in many more species in the wild.

“I think that facultative parthenogenesis is a more common occurrence than people would ever expect,” Warren Booth, an evolutionary biologist at the University of Tulsa in Oklahoma who was not involved in the study told PBS Newshour. “We now have the genetic tools to easily and inexpensively address these questions on a wide scale.”