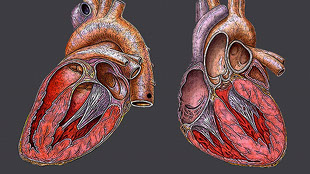 WIKIMEDIA, HUGO HEIKENWAELDERMouse hearts whose own cells were replaced with human stem cells were able to beat on their own, according to a paper published earlier this week (August 13) in Nature Communications. The beating isn’t yet strong enough to pump blood, but the results are encouraging for those seeking to engineer replacement organs for transplant.

“Our engineered hearts contain about 70 percent human heart precursor cells, which provide enough mechanical force for contraction,” Lei Yang, a biomedical engineer at the University of Pittsburgh and an author of the paper, told New Scientist.

Decellurizing organs and then seeding them with new cells is a promising approach in the race to engineer tissues and organs. The strategy could eventually allow researchers to supplement the transplant organ supply with donated human organs that were not fit for use as they were, or with animal organs. Doctors could even...

To make their engineered heart, Yang and colleagues washed the cells out of mouse hearts with detergent. They then seeded the remaining extracellular matrix with human induced pluripotent stem cell (iPSC)-derived cardiovascular progenitor cells, which differentiated into cardiomyocytes, smooth muscle cells, and endothelial cells.

“Using our method, we could generate both muscle and vascular-like structures in the engineered heart constructs,” Yang told New Scientist.

After the cells were distributed and differentiated, the engineered hearts began to contract, though they did not beat as strongly as healthy hearts do. The reconstituted organs also lacked fibroblasts, which are ordinarily present in hearts.