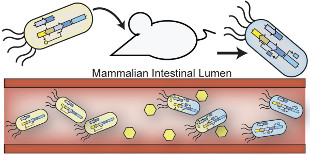 Engineered probiotic E. coli colonize a mouse intestine.COURTESY OF JONATHAN KOTULA, HARVARD MEDICAL SCHOOL/HARVARD'S WYSS INSTITUTESynthetic biologists programmed Escherichia coli to sense and record environmental stimuli, such as the antibiotic anhydrotetracycline,  in the mouse gastrointestinal tract. In their paper, published their work in PNAS this week (March 17), Harvard Medical School’s Pamela Silver and her colleagues wrote that their work provides proof of the principle “that E. coli can be engineered into living diagnostics capable of nondestructively probing the mammalian gut.”

Silver and her colleagues constructed a two-part genetic memory system, based on the phage lambda cI/Cro genetic switch, which they used to equip E. coli cells to sense and record exposure to anhydrotetracycline as they pass through the mouse gut.

“This is a really exciting advance,” MIT’s Chris Voigt, who was not involved in the work, told New Scientist. “This is the first use of a...

The researchers are now working to construct additional switches to sense signs of toxicity or inflammation, for example. “This work lays a foundation for the use of synthetic genetic circuits as monitoring systems in complex, ill-defined environments, and may lead to the development of living diagnostics and therapeutics,” they wrote in PNAS.