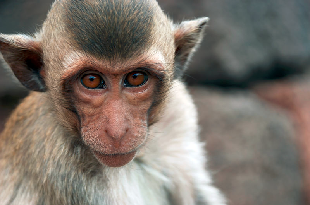 The MECP2 gene, which codes for a protein involved in transcriptional regulation and microRNA processing, is frequently duplicated in the genomes of people showing symptoms of autism. Now, a team of researchers in China has reported that monkeys genetically engineered to contain multiple copies of MECP2 also show some autism-like behaviors, supporting claims that monkeys would be good models to study the condition. The team’s findings were published earlier this week (January 25) in Nature.

The monkeys display “very similar behaviors related to human autism patients, including repetitive behaviors, increased anxiety and, most importantly, defects in social interactions,” study coauthor Zilong Qiu of the Institute of Neuroscience at the Chinese Academy of Sciences in Shanghai told The New York Times.

Their current study reports reduced social interactions in another generation of MECP2-engineered individuals as compared to wildtypes, and represents the first observation of autism-like behaviour in genetically engineered monkeys. The results “indicate the feasibility and reliability of using genetically engineered non-human primates to study brain disorders,” the authors wrote in their paper.

But Elinor Sullivan of Oregon Health and Science University, who was not involved in the work, told STAT News that the findings should be interpreted with caution. “This paper is really important because it’s showing that you can have a genetic manipulation and see behavioral differences,” she explained, but emphasized that the study focused on “very, very, very basic behavioral measures,” which included recording the number of grunts during observation periods, and the total time spent in movement.

Qiu told The New York Times that one important next step will be imaging the monkeys’ brains, “trying to identify the deficiency in the brain circuits that is responsible for the autism-like behavior.”