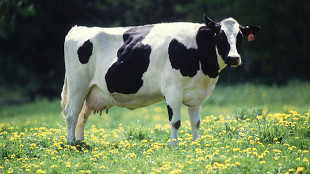 Cattle with the mouse gene SP110 added to their genomes have immune cells that are better at slowing the growth of Mycobacterium bovis and are less susceptible to developing the internal symptoms of tuberculosis (TB), according to a study published this week (March 2) in PNAS.

In the first successful creation of transgenic cattle using the genome-editing tool transcription activator-like effector nuclease (TALEN), researchers from Northwest A&F University in Shaanxi, China, inserted a mouse nuclear body protein gene, SP110, into the genome of fetal Holstein-Friesan cow cells. The cells were then used as nuclear donors for embryos that gave rise to 23 live cattle, 13 of which survived past six months. The gene was chosen for its known role in innate immunity to M. tuberculosis, where it controls the growth of the bacterium in mammalian immune cells and triggers infected cells to undergo programmed...

Next, the scientists tested the TB resistance of their transgenic cattle in the lab and on the farm. When immune cells cultured from the cows were exposed to M. bovis, which infects cattle, the bacteria grew at roughly half the rate that they did in non-transgenic cells, and infected transgenic cells underwent programmed rather than premature cell death. The researchers observed similar patterns in live cows either directly infected with TB-causing bacteria or who were kept in the same pen as infected animals. One of the three infected transgenic animals did not contract the disease, while the other two had fewer bacteria and disease-caused internal lesions than control animals. Of the nine transgenic cows exposed to infected cattle, six failed to contract TB, while the remaining three had lesser symptoms than all nine of the non-transgenic controls.

The transgene was also passed on to the next generation, where it conferred the same benefits. “All these results demonstrate that inserting SP110 into cattle is a highly promising technique for creating resistance to M. bovis infection and that this genome modification for tuberculosis resistance in cattle is heritable,” the authors wrote in their paper.