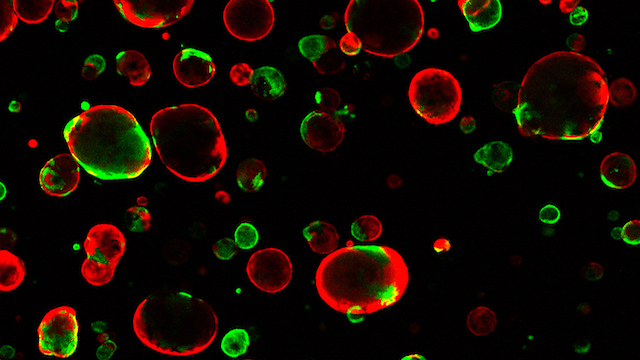 To examine the changes that promote cancer metastasis, researchers first developed organoids using primary tumor and metastatic cells from a mouse model of PDA. By comparing these mini organs, the team found that metastatic organoids had more active enhancers, short DNA sequences that bind to transcription factors to enhance gene expression, than the ones derived from primary tumor cells.

Further analysis revealed that FOXA1, a protein active during embryonic development, was binding to these enhancers. In addition, cells with higher levels...

“We show that to metastasize, the cell has to change, in effect, its whole telecommunications network—its enhancers are being reprogrammed,” study co-author Christopher Vakoc, a cancer epigenetics researchers at Cold Spring Harbor Laboratory, says in a statement. “It seems quite plausible from our results that reprogramming of enhancers enables cancer cells, generally, to achieve metastatic competence.”

When Vakoc and colleagues injected organoids producing high levels of FOXA1 into the pancreata of mice, the animals formed tumors that spread to the lungs. The cancer did not spread in animals injected with organoids lacking FOXA1.

The researchers also assessed human pancreatic cancer tissue, and found that amounts of FOXA1 increased with disease severity, with higher levels in metastatic lesions than in primary tumors.