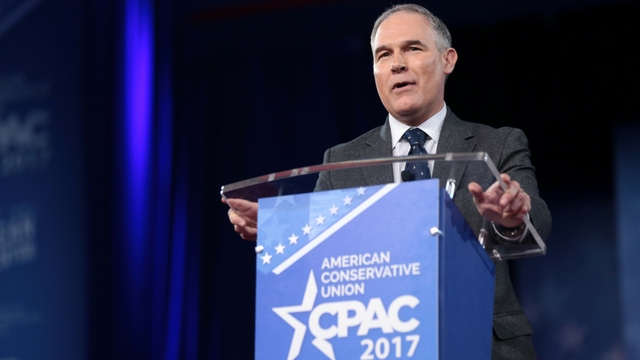 Update (June 22): In an ongoing agency overhaul, Environmental Protection Agency (EPA) head Scott Pruitt plans to replace every member of the Board of Scientific Counselors (BOSC) “whose three-year appointments expire in August,” according to E&E News, which acquired an EPA email Monday (June 19). In the email, EPA Office of Research and Development acting head Robert Kavlock says that the board’s upcoming summer and fall subcommittee meetings will be cancelled as a consequence of the house-cleaning, E&E reports.

“It effectively wipes out the BOSC and leaves it free for a complete reappointment,” Deborah Swackhamer, BOSC executive committee chairwoman and University of Minnesota professor emeritus, tells The Washington Post.

According to The Post, similar shifts to the status quo may be on the horizon for other EPA scientific advisory groups, such as the Science Advisory Board (SAB) and the Clean Air Scientific Advisory Committee (CASAC).

Environmental Protection Agency (EPA) head Scott Pruitt will replace 12 out of the 18 scientists currently on the Board of Scientific Counselors (BOSC)—a panel that advises the EPA’s Office of Research and Development—while the Department of the Interior Secretary Ryan Zinke has frozen more than 200 advisory groups for evaluation.

As The Washington Post reported, these moves mark the beginning of a Republican-led initiative aimed at altering how these agencies assess the science that underlies policy decisions. Both agencies began apprising officials of these changes starting Friday (May 5).

EPA spokesman J.P. Freire told The New York Times that replacements for the advisory board scientists, whose terms were coming to an end, may come from the industries regulated by the EPA. According to the article, critics are touting the dismissal of BOSC scientists as an effort aimed at diminishing the EPA’s oversight.

“No one has been fired or terminated,” Freire told The Washington Post in an email, indicating that new advisors will replace those whose terms have ended. “We’re not going to rubber-stamp the last administration’s appointees. Instead, they should participate in the same open competitive process as the rest of the applicant pool.”

The BOSC advises the EPA’s Office of Research and Development by assessing agency research, laboratories, programs, and strategy to ensure scientific quality, as stated on its website.

Meanwhile, Interior Secretary Zinke has halted various advisory entities—both inside and outside of the department—while he reviews them. This includes advisory boards to the Bureau of Land Management, among others, the Post reports.

In the midst of these changes come reports of the EPA continuing to remove climate change mentions from its website, following up on the initial removal of the main page on April 28.