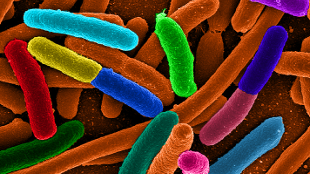 Falsely colored E. coliWikimedia, MattosaurusEpigenetics may hold the answer to the virulent strain of E. coli that swept across Germany in May and June 2011, causing thousands of infections and dozens of deaths, according to a study published yesterday (November 8) in Nature Biotechnology.

At the time of the outbreak, researchers around the world worked furiously to sequence the genome of the unknown E. coli strain and identify its virulence secrets. The experience was a testament to the power of current sequencing technologies—allowing researchers to achieve a complete genome sequence within just 3 days—but it also showed its limitations. The genome sequence alone could not explain the fast and furious outbreak.

To get to the bottom of the mystery, Eric Schadt, director of Mount Sinai’s Institute for Genomics and Multiscale Biology, and colleagues at Harvard Medical School took a second look at the genome, this time...

Sure enough, the team found some 50,000 methyl-carrying adenine (A) bases throughout the E. coli genome. They further identified a group of enzymes, including some that are new to science, that target the adenines of different DNA motifs, such as GATC and ACCACC. The group further showed that such epigenetic modifications affected the expression of a wide range of genes, particularly those involved in cellular pathways linked to bacterial growth and motility. One motif— CTGCAG—was specific to the outbreak E. coli strain, suggesting it played a role in the bacterium’s high level of virulence. Indeed, knocking out the methylase that targeted this motif caused structural changes in the genome that could affect virulence and pathogenicity.

“The DNA bases targeted for modification are highly non-random, and the targeting had a broad effect on the transcription of genes,” Schadt said in the release. “It almost appears like another language.”