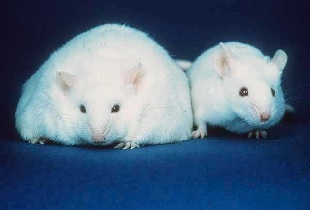 WIKIMEDIA, SCHUMINWEBLast year, the World Health Organization estimated that more than 600 million people in the world are obese. Although studies have revealed genetic contributors to weight, the hereditary component of obesity is not well understood. Now, the results of a study published yesterday (January 28) in Cell have suggested that a person’s predisposition to obesity is at least partially determined by epigenetic regulation.

“We show that you can have a strong phenotype [obesity] with absolutely no genetic underpinnings,” study coauthor J. Andrew Pospisilik of the Max Planck Institute of Immunobiology and Epigenetics in Freiburg, Germany, told Science.

Previous work had shown that genetically identical mice with only one copy of Trim28—a gene that encodes a chromatin-interacting regulatory protein—showed considerable variation in weight. Generating their own populations of “identical” mutant mice, the researchers discovered that this variation was not normally distributed, but associated with two distinct groups:...

When the team probed the mutants’ gene-expression profiles, it found that mice in the obese group showed reduced expression of an interacting network of imprinted genes—those that are expressed by either the maternally or paternally inherited copy. The results suggest that the Trim28 protein forms part of an epigenetic switch, the authors wrote in their paper.

“Once the switch is triggered, it is a lifelong, epigenetically driven decision that ends in a stable, either a lean or obese phenotype,” Pospisilik said in a press release. “The effect is akin to a light switch—on or off, lean or obese.”

Paul Franks of the Lund University Diabetes Center in Malmö, Sweden, who was not involved in the work, told Science the researchers now must identify the regulators of this network switch. “The big question now is, ‘What is the trigger?’” he said. “If you could determine what that was, you’d have the basis for intervention.”