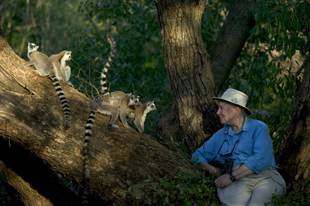 PHOTO BY CYRIL RUOSO, COURTESY OF THE JOLLY FAMILY AND UNIVERSITY OF SUSSEXConservationist and lemur expert Alison Jolly died of breast cancer earlier this month (February 6) at home in Lewes, East Sussex, U.K. She was 76 years old.

Jolly was born in Ithaca, New York, in 1937, the daughter of an artist and a professor of romance languages. She earned her bachelor’s degree from Cornell University in 1958 and her PhD from Yale in zoology in 1962, where her interest in lemurs began.

Throughout her life, Jolly spent time in the field in Madagascar, researching ring-tailed lemur (Lemur catta) behavior. In 1966, she published a paper in Science in which she proposed that the primates’ social behavior was as important to the development of intelligence as tool making and hunting. That same year, Jolly published a book, Lemur Behavior, detailing her observations that female lemurs...

“This was a real surprise to people in the ’60s,” Patricia Wright, a lemur expert at Stony Brook University in New York told The New York Times. “Female leaders were still so rare. And here comes a woman presenting a model of primates where the females are leaders—effective leaders.”

Jolly held positions at the Wildlife Conservation Society, Rockefeller University, Princeton University, and the University of Cambridge. Since 2001, she had been a visiting senior research fellow at the University of Sussex. Beyond being a pioneer in the field of primatology, Jolly was a skilled mentor to young scientists and a conservationist.

According to an obituary from the University of Sussex, Jolly led conservation approaches that encouraged local participation and were responsible for the preservation of large areas of wilderness and animal habitats in Madagascar. “The challenge for environmentalists is to bridge the gap between foreign and local values: what matters to people on the ground and what matters scientifically and aesthetically to the world at large,” Jolly said to publicize a talk on environmental education in Madagascar in January 2012.

She is survived by her husband, Richard, four children, and four grandchildren.