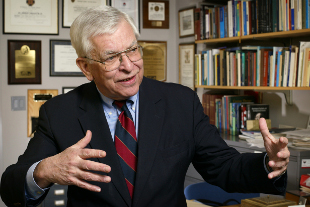 At the time of his passing, Johnson was a professor of neurology and neuroscience at the Johns Hopkins University School of Medicine. He arrived at Hopkins in 1969 and served as the hospital’s neurologist-in-chief until 1997. “He was an internationally renowned scientist who never showed off about it. He loved Hopkins and kept turning down high-status jobs elsewhere,” Paul McHugh, former Hopkins psychiatrist-in-chief, told The Baltimore Sun.

Johnson completed his undergraduate studies in 1953 and earned a medical degree in 1956, both through the University of Colorado. He studied at a number of hospitals including Stanford University Hospitals and Massachusetts General Hospital, and was a professor at Case Western Reserve University from 1964 until he joined the Hopkins faculty.

Johnson conducted research in Peru, Thailand, and Papua New Guinea, among other countries, studying neurological diseases and their transmission. “Patients came from all over the world with mysterious infections of the nervous system to see him,” McKhann said in a press release. Johnson also researched prion diseases and chaired a US Institute of Medicine committee on the subject, which released a 2004 report highlighting the need for more funding and investigation into prion diseases.

“His research was novel and had a major influence on academic medicine and the treatment of virus infections of the brain,” said Janice Clements, one of Johnson’s former students, in the press release. “One of the first patients with HIV was diagnosed by Dr. Johnson because the disease had caused neurological disease.”

Johnson is survived by his wife, three sons, a daughter, a brother, and several stepchildren and grandchildren. His first wife, to whom he was married for more than 50 years, died in 2008.