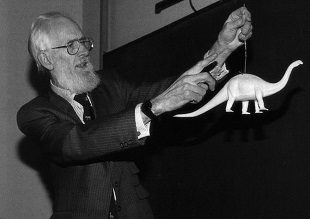 © ZOOLOGICAL SOCIETY OF LONDONZoologist Robert McNeill Alexander, an emeritus professor at the University of Leeds famous for his seminal contributions to the field of animal locomotion (and his tendency to imitate animals during his lectures), died earlier this year (March 16). He was 81.

“His secret was that he always treated his work with playful enthusiasm—and his fun with great seriousness,” University of Leeds colleague John Lydon wrote on the university’s website. “His was a well-lived life.”

Born on July 7, 1934, in Lisburn, Northern Ireland, Alexander attended school at Tonbridge in Kent, England. He read natural sciences at the University of Cambridge, and later stayed on to complete a PhD on the function of swim bladders in fish. From 1958 to 1969, he held a post as lecturer at Bangor University (which was then University College of North Wales), studying the mechanics of swim bladders and...

Moving to Leeds, Alexander turned his attention to animal locomotion more broadly, publishing a landmark paper in 1976 on the gait of dinosaurs that included an equation for calculating dinosaur speed based on stride length and body size. Some of his subsequent research focused on the mechanics of running and jumping in humans.

An author on more than 250 papers, Alexander was revered for his eccentric teaching style, The Telegraph reported. One former Leeds student recalled his “active demonstrations of the mechanics of movement . . . walking like a chimp or chewing like a cow.” Writing in The Guardian, Lydon recalled his first impression of Alexander at a university open day: “A tall, bearded, impressive figure, with a six-foot python wrapped around his chest.”

Alexander was also a popular figure outside of academic circles for his dedication to science communication. He produced a CD in 1995 called “How Animals Move,” which was widely used in schools and universities, and he served as scientific advisor to a number of television programs about prehistoric life on Earth. In 1996, he earned first place in the Mail on Sunday’s list of “Britain’s Nuttiest Professors.”

Elected a fellow of the Royal Society in 1987, Alexander was secretary of the Zoological Society of London from 1992 to 1999. Later in his career, he published several textbooks on animal locomotion, including The Unity of Form and Function in 1994 and Principles of Animal Locomotion in 2003. In 2000, he was awarded a Commander of the Most Excellent Order of the British Empire (CBE) medal  in recognition of his contributions to science.

He is survived by his wife and their two children.