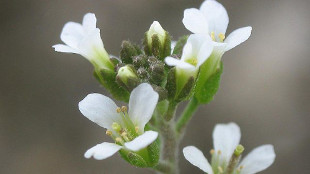 Epigenetic mutations, such as changes in the patterns of DNA methylation, occur much often more in the thale cress (Arabidopsis thaliana) genome than genetic mutations that alter the DNA bases, but at a low enough rate to be subject to natural selection, according to a study published today (May 11) in PNAS.

Methylation on the DNA base cytosine can regulate the expression of genes and transposable elements in organisms including the model plant A. thaliana, in which 14 percent of the cytosines are methylated. While some methylation marks are maintained from generation to generation in A. thaliana, others are rapidly acquired or lost over time.

“Epigenetic mutations are about 100,000 times more likely than DNA sequence mutations,” study coauthor Frank Johannes of Groningen said in a statement. Importantly, however, the epigenetic mutation rate is still low enough to be subject to natural selection, the authors wrote in their paper. With the first estimates of cytosine methylation gain and loss in A. thaliana, “we are now in a position to quantify these dynamics precisely on a genome-wide scale,” Johannes added.