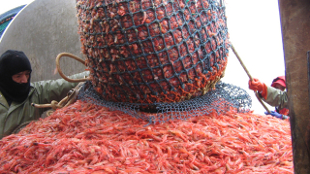 WIKIMEDIA, NOAA FISHWATCHEurope’s beleaguered fish stocks could be getting some relief soon, with EU lawmakers deciding Wednesday (October 23) to reject a proposal to heavily subsidize the continent’s commercial marine fishing fleet. The vote knocked down a €6.5 million ($8.9 million) budget to fund the European Union’s Common Fisheries Policy through 2020, with legislators instead backing a plan to monitor fish populations and enforce conservation regulations.

Conservation groups and researchers are applauding the parliament’s decision to reject parts of that plan, which would have financed the addition of new boats to the EU’s already-swollen fishing fleet, which according to the EU, is two or three times larger than is ecologically sound. Seventy-five percent of EU fish populations, “stocks” in the parlance of fisheries science, are overfished, and scientists and conservationists have been calling on the European Parliament to devote more resources to marine ecology research and the enforcement of...

The fishing industry was, however, granted some funding—such as aid in fitting older boats with new engines—which could have the effect of increasing overall fishing pressure.