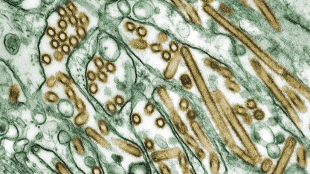 Colorized transmission electron micrograph of Avian influenza A H5N1 viruses (seen in gold)WIKIMEDIA, CDCMore than 50 researchers have signed a letter to European Commission (EC) president José Manuel Barroso urging the body to hold a conference to discuss the wisdom of continuing with so-called “gain-of-function” studies, in which viruses are mutated to become more transmissible between mammals. “Gain-of-function research into highly pathogenic microbes with pandemic potential has global implications for public health,” Columbia University infectious disease researcher and letter signatory Ian Lipkin told Nature. “We are not seeking to shut down all gain-of-function research, but asking that stakeholders meet to establish guidelines for doing it.”

The work that sparked the debate around gain-of-function studies, and prompted the December 18 letter, was that of virologist Ron Fouchier of Erasmus Medical Center in Rotterdam, the Netherlands. In 2011, Fouchier struggled to find a journal that would publish his research...

Fouchier’s struggles, which included the Dutch government using export regulations to bar him from publishing his results, compelled the European Society for Virology (ESV) to write its own letter to the EC in October. That letter expressed concern that the Dutch government’s tactics were inappropriate and threatened to set a precedent that could stymie the dissemination of research findings elsewhere.

On the scientific side of the debate, some have argued that gain-of-function research, especially those studies that engineer deadly strains of the bird flu virus, can potentially result in inadvertent escapes from the lab and widespread infection. Proponents of the work argue that studying how mutations confer the ability to infect new individuals via novel routes can yield key insights into how the pathogens spread.