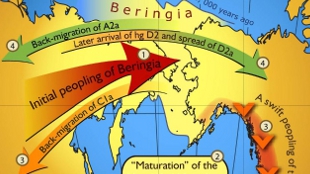 Models of gene flow from Aisa to the Americas, like this one from a 2007 PLOS ONE paper, may need to be reconsidered.WIKIMEDIA, ERIKA TAMM ET AL.Native Americans may not have descended from East Asians who crossed the Bering Land Bridge more than 15,000 years ago, according to a new genomic analysis of a millennia-old Siberian skeleton. A portion of the nuclear DNA recovered from the upper arm bone of a 4-year-old boy that was buried near the Siberian village of Mal’ta about 24,000 years ago is shared by modern Native Americans and no other group. But the boy appears to have been descended from people of European or western Asian origin.

Eske Willerslev, a University of Copenhagen ancient DNA expert, announced the findings last week at the Paleoamerican Odyssey conference in Santa Fe, New Mexico, and the resulting manuscript is in press at Nature. In addition...

Conspicuously absent from the child’s DNA, however, was any connection to modern East Asians, a genetic relationship present in the genomes of virtually all Native Americans. This means that the population from which the boy came must have included ancestors of modern Native Americans, upsetting the popular belief that the original inhabitants of North, Central, and South America descended directly from East Asians.

According to Science, Willerslev and Graf suggest that at some point before 24,000 years ago, the ancestors of modern Native Americans and those of East Asians split into two genetically distinct groups. The Mal’ta boy belonged to a population that migrated to Siberia from Eurasia and mixed with the second before the newly formed population moved into the New World, eventually populating the Americas.

Previously, the presence of European DNA in the modern Native American genome was attributed to interbreeding after Europeans made contact. This new finding may turn that supposition on its head. “The west Eurasian [genetic] signatures that we very often find in today's Native Americans don't all come from postcolonial admixture,” Willerslev said during his presentation. “Some of them are ancient.”

Though reconstructing humanity’s westward expansion into the New World involves some speculation, recovering the intact DNA of the Mal’ta boy represents a technological feat: his is oldest complete genome of a modern human sequenced to date.