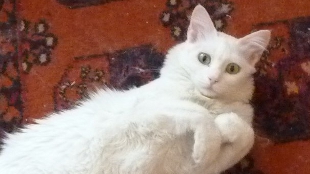 Catnip is widely known for its ability to get cats high. Give a cat a toy laced with the stuff, and she will start rolling around on the floor and bouncing off the walls—literally. But what is catnip, what does it do to our cats, and why doesn’t it have any effect on dogs?

It’s as natural as drugs get—catnip is a plant. More specifically, it’s about 250 species of perennial herbs in the mint family.

How does catnip work?

Catnip’s behavior-altering qualities stem from an essential oil called nepetalactone found in the leaves and stem of the plant. Cats inhale the nepetalactone, which essentially acts as an artificial feline pheromone, private veterinarian Ramona Turner wrote in Scientific American. Within the cat’s nasal tissue, the chemical is believed to bind to receptors to stimulate sensory neurons that eventually trigger neurons of the amygdala and...

Who does catnip affect?

Catnip affects around 70 to 80 percent of domestic cats (not kittens under 8 weeks of age), as well as most wild cats, and has been suggested as a potentially beneficial odor to stimulate cats kept in captivity. “From our small domestic companions to the largest lions, cats are exquisitely susceptible to nepetalactone,” Turner wrote. Catnip does not appear to have the same effect on dogs, though the mechanistic reason for this is unclear. Nepetalactone is also effective at repelling insects—from cockroaches to termites to mosquitoes—as well as rats and mice, and has been investigated as a possible alternative pest repellent to DEET.