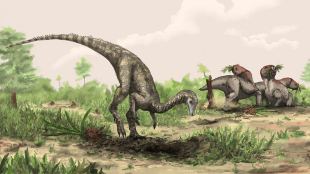 Mark Witton, Natural History Museum, LondonPaleontologists think they may have identified the oldest dinosaur known to science, a long-necked labrador-sized biped that lived on the ancient supercontinent Pangaea around 243 million years ago. Published this week (December 5) in Biology Letters, the findings push back the date for the dawn of the dinosaurs by at least 10 million years, though the authors and other scientists have cautioned that the fossils may represent a close relative of the dinosaurs rather than the earliest member of the dinosaur family.

The fossil evidence for the species, called Nyasasaurus parringtoni, was first discovered in the 1930s in southern Tanzania by Rex Parrington, a paleontologist at the University of Cambridge in the United Kingdom. One of Parrington’s students, Alan Charig, who studied the fossils for decades, thought the bones represented the earliest known dinosaur—but never published his conclusions.

In the new study—which...

At the very least, then, the findings indicate that close ancestors of dinosaurs existed around 10 million years earlier than the oldest known dinosaurs, Eoraptor and Eodromaeus. The study also suggests that early dinosaur radiation “occurred over a longer timescale than previously thought,” the authors wrote.

Michael Benton, a paleontologist at the University of Bristol, told ScienceNOW that the authors are right to be “properly conservative” in recognizing that Nyasasaurus may not be a true dinosaur. Even so, he added, the existence of a close dinosaur relative that early “guarantees [that dinosaurs] must have originated then also.”