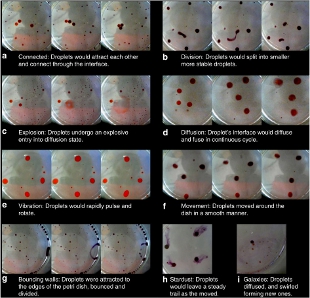 Examples of different oil droplet behavior observed in the experimentImage from Nature CommunicationsIt’s not exactly survival of the fittest, but researchers in Scotland have shown that oil droplets can exhibit a rudimentary form of evolution. The nonbiological system comprised more than 200 different droplet types composed of four chemicals that exhibited predictable behaviors when dropped into petri dishes full of water. The scientists analyzed the droplets’ fitness based on those behaviors, and found that they could direct the evolution of more stable droplets.

Glasgow University chemist Lee Cronin, who led the work, told WIRED.co.uk that the experiment is an important demonstration of the principles that may have spurred nonliving components to give rise to living things. “Right now, evolution only applies to complex cells with many terabytes of information but the open question is where did the information come from?” he said. “We have shown that it is...

The researchers used a robot based on a simple 3-D printing platform that created oil droplets at random from combinations of four different chemicals—1-octanol, diethyl phthalate, 1-pentanol, and either octanoic acid or dodecane. Cronin and his team analyzed the behavior of 225 different droplet types, each of which behaved slightly differently in water. Using the stability of the droplets as a proxy for fitness, the researchers selected the most-fit drops and used their chemical recipes to make subsequent generations of drops. After 21 rounds of selection, the scientists showed that the droplets had “evolved” to become more stable.

“This initial phase of research has shown that the system we’ve designed is capable of facilitating an evolutionary process, so we could in the future create models to perform specific tasks, such as splitting, then seeking out other droplets and fusing with them,” Cronin said in a statement. “We’re also keen to explore in future experiments how the emergence of unexpected features, functions and behaviors might be selected for.”