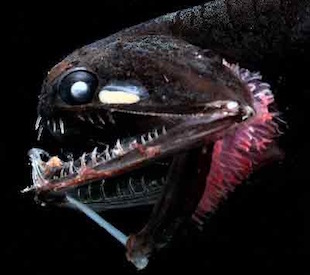 WIKIMEDIAFrom the bizarre-looking anglerfish to sharks, bioluminescence is surprisingly common among ocean dwellers. Now, researchers from St. Cloud State University in Minnesota have shown that fish evolved the ability to make their own light on at least 27 separate occasions, according to a study published yesterday (June 8) in PLOS ONE. The fishes use their glowing abilities for everything from finding prey, to luring in mates, to communicating with one another.

“This is the most comprehensive scientific publication on the distribution of fish bioluminescence ever written, and the authors show that bioluminescence evolved way more times independently than previously thought,” Prosanta Chakrabarty of the Louisiana State University Museum of Natural Science, who was not involved in the study, told Smithsonian.

Matthew Davis of St. Cloud State and colleagues analyzed 10 nuclear genes and one mitochondrial gene from 301 taxonomic groups of ray-finned fishes, which comprise the vast...

Fish evolved intrinsic bioluminescence—the ability to produce light without the aid of bacteria—eight times, representing more than half of all species of bioluminescent fish. Bacterially mediated bioluminescence evolved 17 times, Davis and colleagues found. Fish evolved their light-emitting abilities during the Early Cretaceous (150 million years ago) through the Cenozoic.

“If one species of bacteria evolves the ability to glow, then is eaten and proliferates in the guts of four different fishes, you could argue that bioluminescence evolved once in the bacterium,” Steven Haddock of the Monterey Bay Aquarium Research Institute told National Geographic’s Not Exactly Rocket Science. “To me, this is much less interesting than fishes that have their own chemical and genetic machinery.”